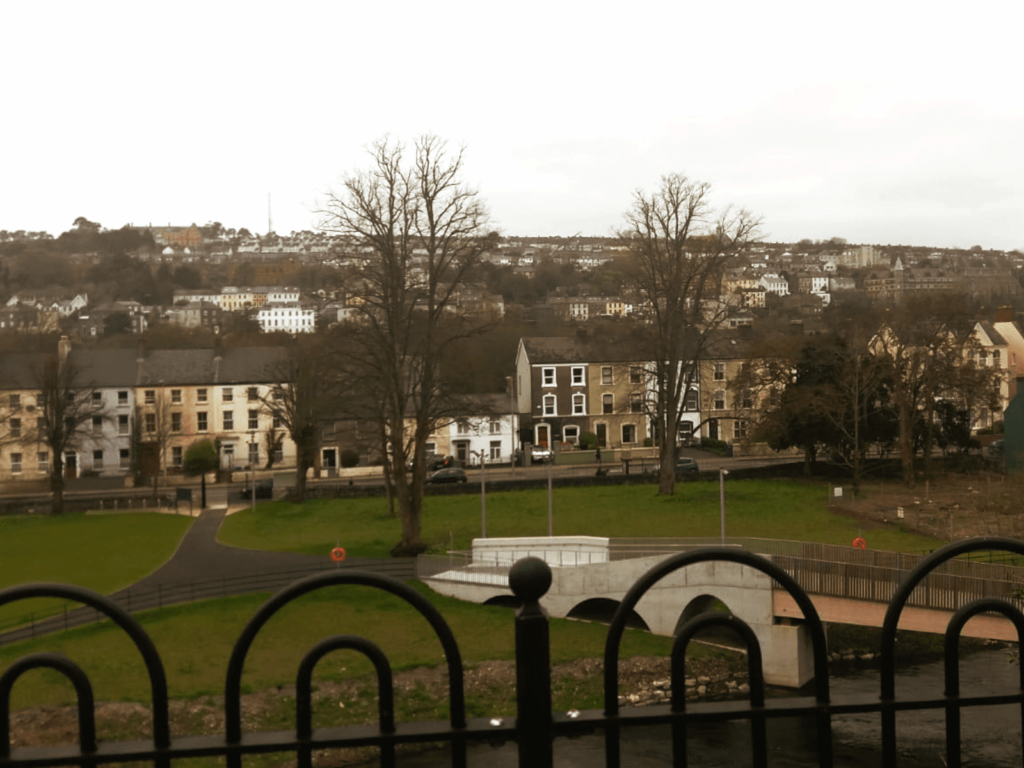 Wednesday, 27.02.2019
The group had an early start at the hostel, leaving at around 4.30am to drive to the airport in Dublin. All went smoothly and the plane took off just in time. The H2 Team – Lucy, Jackie, Peter, Gina, Michael and Lisa – wish them all the best.
It was lovely to meet you all! Looking forward to seeing you again!

Tuesday, 26.02.2019
The school language trip to Ireland is nearly over, however, there is one day left which the students will spend in Dublin! But firstly they were brought to the bus stops in the morning where the students said good-bye to their host families in Carrigaline. At around 7.20am they were on the road again to the capital of Dublin. They will have a guided city tour (with stops at Georgian houses and the Phoenix Park) and will have plenty of free time afterwards to discover Dublin on their own!

Monday, 25.02.2019
Monday was the final day of English lessons at the H2 School in Minane Bridge. The students enjoyed one last morning with their English teachers Lucy, Jackie and Peter. At the end of their final lessons they all came together for a sing-along and presented the Irish songs they had learned with Peter. They were also given their student reports and certificates. Shortly afterwards the English teachers and Lisa from the H2:IRL team waved them good-bye and wished them their farewells. The next activity was a trip to East Cork to the famous Ballymaloe Cookery School. The students had a guided tour through the gardens (including a visit to a very unique little house decorated with thousand of different shells and a huge greenhouse) and later on they learned more about the  Ballymaloe House Hotel.  They were greeted by a very friendly and hospitable staff who took their time to show them around places. The day concluded with a nice cup of tea and home-baked delicious cakes at the breakfast room of the hotel.

Sunday, 24.02.2019
The students enjoyed a lovely relaxed morning with a delicious Irish breakfast (toast, black pudding, sausages, tomatoes and fried egg). Some host families took their students to the beach or went for a stroll. At midday they group was picked up by our bus driver to go to the harbour town of Cobh. They went for a stroll along the pier first and enjoyed the views onto the Cork harbour and the beautiful Victorian house facades. They were then scheduled for a visit to the Titanic Experience. Formerly knows as Queenstown, Cobh was the last port of call of the Titanic in 1912. Here, at the White Star Line Ticket office (in which the today’s Titanic Experience is located) the remaining 123 passengers boarded the Titanic. The students received a “boarding ticket” with one of the names of those passengers. They were taken on a virtual tour to board the tenders and join Titanic for her maiden voyage to New York. They viewed the original pier and experienced life aboard Titanic and learned about the conditions on board for third and first class passengers. Finally the students had the opportunity to out find out about the fate of “their” passenger. In the evening, Fionán (our Ceili dance teacher) was already waiting for our students at St. Mary’s School in Carrigaline. He showed them the rules for this typical Irish folk dance. At the end of the lesson everyone was able to follow along the sweeping rhythms of “one, two, three, on the spot and one, two, three, on the spot!”

Saturday, 23.02.2019
The students are currently at school  with one more hour ahead of them. Our English teachers have played a role game and a quiz about conflicts, started a debate, talked about St. Patrick’s day and Irish life & culture through songs sung by Peter on his ukulele. Later on they will go to Kinsale, a lovely fishing village right at the Atlantic Sea. They will meet Barry the tour guide for an historic stroll around the town and will finish at the Trident Hotel for a nice cup of tea and freshly baked scones with cream and jam. Afterwards they will have some free time to explore Kinsale by themselves, passing along the narrow streets and colourful house with restaurants and galleries. The day will be concluded with a little trip further out to the “Old Head of Kinsale” where they will be able to enjoy a stunning view down from the cliffs onto the sea and the surrounding coast. The final stop will be made at Garrettstown sandy beach. They weather looks much brighter and hopefully the sun will come out!

Friday, 22.02.2019
After their school day, the student were picked up again by the H2 bus and headed to the famous Blarney Castle. They strolled around the beautiful park, climbed up to the top of the castle to kiss the Blarney Stone, passed through the fern garden and stopped at the Wishing Steps. They really loved the gardens and would have liked to stay longer. The afternoon was concluded with a shopping spree at Blarney Woollen Mills where they had the opportunity to buy lots of souvenirs for the family and friends. In the evening they made their way back home to Carrigaline where the host families were already waiting with a delicious dinner.

Thursday, 21.02.2019
The first morning of English lessons at the H2 School in Minane Bridge started at 9am. In the morning the students were introduced to their teachers for the week – Lucy, Jackie and Peter. After a short placement test with multiple choice questions and a writing task the students were split into three smaller groups. Some introduction- and warm-up games helped to ease into the English language. Our English teachers are delighted with the students – very committed and lovely students! In the afternoon the group headed to Cork City for a guided city tour with stops at St. Finbarr’s Cathedral, the Cork University campus, the famous English Market and some free time afterwards. Unfortunately the weather is not spectacular, but a least it was dry during the afternoon.

Wednesday, 20.02.2019
A new group of students from HLT Semmering and their teachers arrived to Dublin at 1:40pm – ahead of the scheduled time! At the baggage claim some of the luggage took a little longer to get from the plane but all in all everything went smoothly. They were welcomed by our bus driver and H2 member Michael who brought them to the bus and stored their luggage. They made their first stop at the Butlers Chocolate Experience where they got insight of the production and were able to decorate their own piece of chocolate
Later on they headed down to County Cork but were stuck in traffic for a while on the outskirts of Dublin. The journey took about 3.5 hours and they arrived to Carrigaline by 9.40pm. They were warmly greeted by our lovely host families. As it was already very late, most of the students went to bed quickly after a light dinner with their host families.