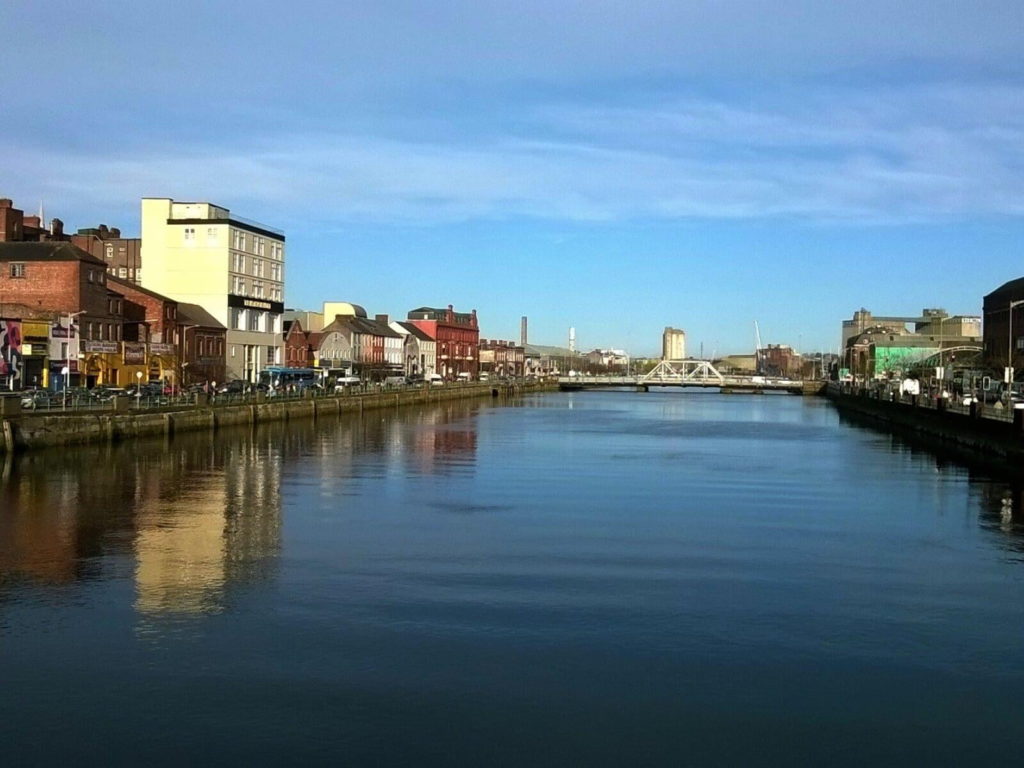 Saturday, 15.09.2018
The plane to Vienna took off on time at 12.15pm. The H2 team Gina, Mary, Michael, Lucy, Jackie and Lisa would like to thank the group for visiting “The Emerald Isle”! We hope they enjoyed their stay in County Cork and in Dublin.

Friday, 14.09.2018
The students had to say good-bye to their lovely host families early in the morning – the departure to Dublin was scheduled for 7am! When they arrived they were greeted by our tour guide who brought them around the city. They stopped at St. Patrick’s Cathedral, passed old Georgian houses and took a break at the famous Phoenix Park! The park is one of the largest city parks in Europe and even has fallow deer living in it! The pope visited Ireland in August and had held mass at the cross there. In the afternoon the students had some free time to explore the capital of Ireland themselves. In the evening they had dinner at the “Aulde Dubliner Pub” in the famous Temple Bar quarter with its lively streets filled with buskers, galleries, pubs and restaurants. Later on they were picked up by our busdriver and headed over to the hostel.

Thursday, 13.09.2018
The lessons with Lucy and Jackie are already over – it was the last day at the H2 International Academy in Minane Bridge. The student reports and certificates were handed over to the students after they had given their presentations on various Ireland-related topics (ie. Conor McGregor who is a famous Irish professional mixed martial artist and boxer). Michael, our H2 busdriver picked them up and the remaining H2 team (Lucy, Jackie and Lisa) waved them off when they left the school.
In the afternoon they are going to meet Barry – our tourguide in Kinsale. He will show them around this little fishing village right at the Atlantic Sea. The students will enjoy the view onto Kinsale from Charles Fort and later on will walk around town through the narrow streets. They will be passing coloured houses, hosting galleries, restaurant and cafes. He will inform them about Kinsale’s history and tell them about pirates, white ladies and the giant of Kinsale.
Later on Michael will bring them the famous “Old Head of Kinsale” with its stunning views onto the cliffs, the sea and the sandy beaches of Garrettstown. The final stop of the day will be Garrettstown beach. Hopefully the sun will shine later on

Wednesday, 12.09.2018
A beautiful day with sunshine and blue skies! Perfect for some Gaelic sports after the English lessons. The English teachers Lucy and Jackie have reported that the students are working really hard and that they are participating well in the debates, role plays and other tasks.
In the afternoon the students and their teachers walked through the village of Minane Bridge over to the G.A.A. pitch. G.A.A. is the abbreviation for Gaelic Athletic Association. Two members – Mark and Keith – introduced the students to the famous Irish sport “Hurling” and to “Gaelic Football”. Our students learnt how to handle the “hurley” (wooden stick) and the “sliotar” (ball). At the end they got to play a match among each other.Hurling is an outdoor team game of ancient Gaelic and Irish origin. The game has prehistoric origins, and has been played for 4,000 years! Gaelic Football is a little bit different: it is only a a type of football played mainly in Ireland between teams of fifteen players, with a goal resembling that used in rugby but having a net attached. The object is to kick or punch (with the hands) the round ball into the net or over the crossbar.

Tuesday, 11.09.2018
It is a cloudy but not rainy day today in Minane Bridge. The lessons are going well with role plays, interviews and talks about Irish fairy tales and myths.
The last lesson is nearly finished and the group will head to a little town called Cobh, right at Cork’s harbour. The students will visit the Titanic Experience which is located in the original White Star Line Ticket Office. It was the departure point for the 123 remaining passengers who boarded Titanic back in 1912. Upon check-in our students will receive a boarding card which will have the details of one of the 123 passengers. A tour guide will take them on a virtual journey to board the tenders and join Titanic for her maiden voyage to New York. They will learn about the conditions on board for third and first class passengers and when disaster strikes, they will experience the chill of the sinking, through a unique cinematographic experience. At the end of their visit they will find out if “their” passenger had survived and will learn more about their fate.
Afterwards the students will have some free time to stroll around town and along the pier. There is big cruise ship called “Disney Magic” in for the day – so it will be nice to get a closer look at it.

Monday, 10.09.2018It is Monday morning and the students were picked up from their bus stops and were brought out to Minane Bridge, a rural village near the Atlantic Sea. At the H2 International Academy they were introduced to their English teachers, Lucy and Jackie. After a short placement test the group was divided into two smaller groups. The English lessons are progressing well – the students and teachers have been talking about differences between Austria and Ireland. Political topics were also discussed and the students learnt about the famous sports Hurling and Gaelic Football (among other topics).
In the afternoon they will be heading to Cork City for a guided tour around town, with stops at St. Finbarr’s Cathedral, the Cork University Campus and the famous English Market. Later on they will have some free time to stroll around and go shopping for some souvenirs.

Sunday, 09.09.2018
On Sunday the students had time to sleep in and to enjoy a relaxed morning, eating a full Irish breakfast (with toast, sausages, black pudding, tomatoes, beans and fried egg) and getting to know their host families.
In the afternoon they were picked up by our H2 bus and were brought to the famous Blarney Castle where they climbed up the stairs of the old fort and kissed the “Blarney stone”. They enjoyed some free time strolling around the castle grounds and exploring the extensive gardens. The weather was nice and sunny and temperatures were around 18 degrees.
In the evening they all met back at St. Mary’s school to participate in some Ceili dance lessons with our teacher Fionan. Céilí dances (fíor céili) are a popular form of folk dancing in Ireland. Céilí dances are based on heys (“hedges”, pairs of lines facing), round dances, long dances, and quadrilles. It is a very exhausting but fun dance!

Saturday, 08.09.2018
A group of 26 students and their teachers from AHS Rahlgasse, Vienna, arrived safe and sound (and in time) to Dublin airport. They were greeted by ourH2 team member and bus driver Michael. Once the luggage was stored, the group made their way down to the south of Ireland. In the late evening they were warmly welcomed by our host families in Carrigaline. Most of the students were exhausted from the day of travelling and went to bed quickly.